Sepsis can be treated; the challenge is detection in the early stages and ensuring six key steps are taken in the first hour of recognition. This “Sepsis Six” doubles a patient’s chance of survival and is a core component of a sepsis improvement programme at the Waikato District Health Board.

Since the new programme was launched on 13 September 2018 (World Sepsis Day) every adult patient identified with sepsis saw a doctor within 60 minutes, most within 30 minutes. Before the programme some patients waited up to 360 minutes. The Sepsis Action Group is hopeful that this translates to shorter lengths of stay and a better chance of survival.

“With the majority of patients with sepsis coming through ED (over 80%), the improvements come down to the work of the sepsis action group over the last few years in combination with the frontline staff of Emergency Department, in particular advocates including registered nurse and sepsis survivor Paige Nicholson and senior registered nurse Maria Baxendine.

“According to our data, when we launched the new programme at patient number 38 (see vertical red line below), our new clinical tools helped frontline staff spot sepsis and raise what we call a Red Flag, bringing extra help to the bedside,” states Dr Dobbins. 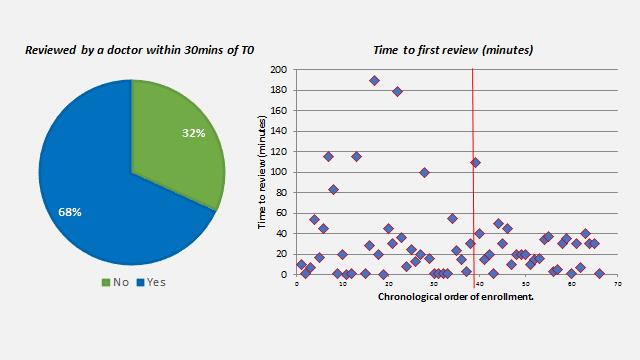 In just 49 days (data collected from 13 September to 31 October), a total of 68 patients were recognised and admitted to Critical Care with sepsis, predominately from Waikato Hospital’s Emergency Department.

Waikato DHB’s director of infectious diseases, Sepsis Trust trustee and action group chair Dr Paul Huggan said, “We’ve been working hard to improve sepsis care for a number of years now. It can be difficult to detect in its early stages, so clear guidelines, education and support for frontline staff is critical. It’s taken a lot of research, time and effort from a large collective of people to get the new clinical tools out there. By gathering information on sepsis care continuously, we’ve also been able to make changes to the programme as we go along. The response from colleagues has been fantastic. They feel much more confident that they’ll be able to take the right steps when faced with a sepsis patient and are taking the time to ask “could it be sepsis?”

But there’s a long way to go, he states.

“The data collected is only looking at adult patients coming through Waikato Hospital, so that means we don’t know exactly how many people are unwell with sepsis in our wider community.”

Based on Waikato studies and other global statistical gaps Dr Huggan is confident thousands of New Zealander’s are dying every year from sepsis.

From July 2017 to June 2018 there were a 659 adult sepsis cases admitted to hospitals in the Waikato.  Out of these cases there was a mortality rate of over 20%, meaning that more than one in five patients with sepsis died in-hospital.

In the same date range, the number of recorded paediatric cases (patients under 15 years) was 17. These patients had an 18% mortality rate.

Waikato DHB’s sepsis clinical nurse coordinator Odette Paul says, “We’re not sure that we’re counting cases of sepsis in children properly. Even so, it is important to do our best to improve sepsis care in children because it’s still a high risk condition. Kids compensate well and look like they’re doing OK but they can go downhill really quickly.”

Sepsis is global problem many people have never heard of but is killing more people than lung, breast, and bowel cancer combined.

Through the work of the Waikato DHB’s sepsis action group and the New Zealand Sepsis Trust, they want to increase sepsis research, awareness and advocacy in New Zealand to improve patient care and support.

By the time you have read this article, hundreds of people would have died from sepsis globally – do you still not know what it is? You’re not alone. Visit the Sepsis Trust New Zealand website to find out more about what sepsis is and how you can help.